For millions of years, plants have been BFF’s with microbes found in soil, forming strong, intricate relationships. Plants interact with both bacteria and fungi in soil, and in fact, if it were not for fungi, there would be no life on land. Here, we give you a rundown on mushrooms, fungi, and their relationship status to plants. 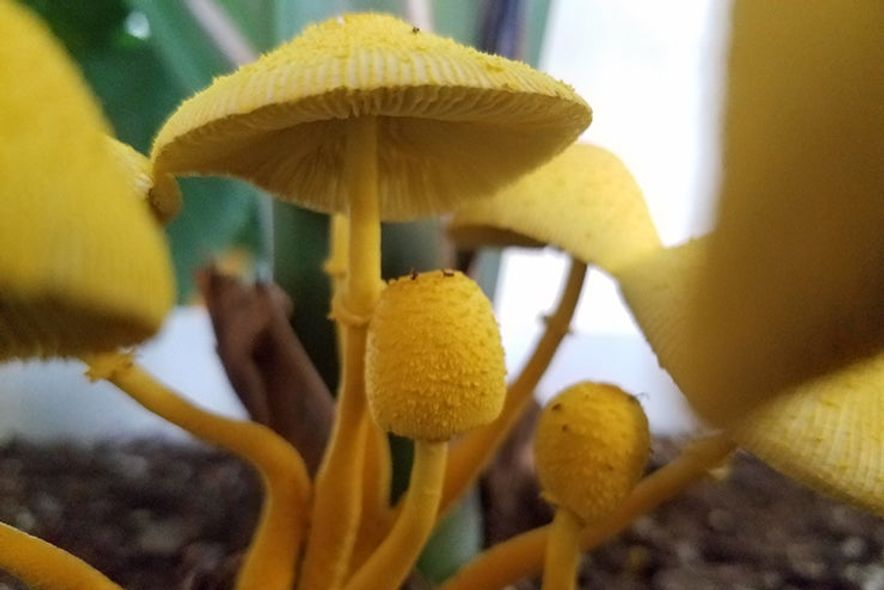 Scientists agree that fungi colonized land well before plants did. As to when they colonized land is a difficult question to answer, as our approximations are based on fossil records and can only tell us when only some organisms existed—i.e. organisms with hard or solid body parts or spores, which many fungi are anything but. Regardless of when fungi colonized land, we know they added a component to soils that was not present in soils before: large amounts of carbon. This helped to not only break down the rocks on land, but also to help retain water on land, and consequently help pave the way for plants!

One of the first and oldest interactions between plants and fungi is the symbiotic relationship known as a lichen. A lichen is formed from cells of algae and a filamentous fungus weaving together to form a unit that is different from either organism. Algae feed the fungus sugars, and the fungus helps to retain moisture and occasionally provide nutrients from either the substrate that they’re growing on or from dust in the air.

On the surface, this relationship seems symbiotic, which would mean both organisms can exist separately, but cooperation makes survival easier (kind of like cohabitating with roommates.) However, this is not the case for the lichen. Lichen does extend the range in which each organism can survive, but although the algae can exist and live freely, the fungus cannot. Whether or not the fungus was able to survive in the past by itself and has lost that ability is up for debate, but either way, the relationship has evolved to be either one of commensalism or parasitism. You know, clingy.

Other fungi in the soil that we know are relative to plants belong to three major groups: the Basidiomycetes, the Ascomycetes, and the Oomycetes. Most endophytic fungi—that is, fungi that live within a plant—are Ascomycetes, with some being Basidiomycetes. And the relationships of many endophytes to their plants are symbiotic. That means these are "friendly" fungi that help their host plant grow.

Fun fact: next time you uncork a bottle of your favorite red, consider that endophytes are also responsible in part for the flavor of most wine grapes, such as the Cabernet Sauvignon. 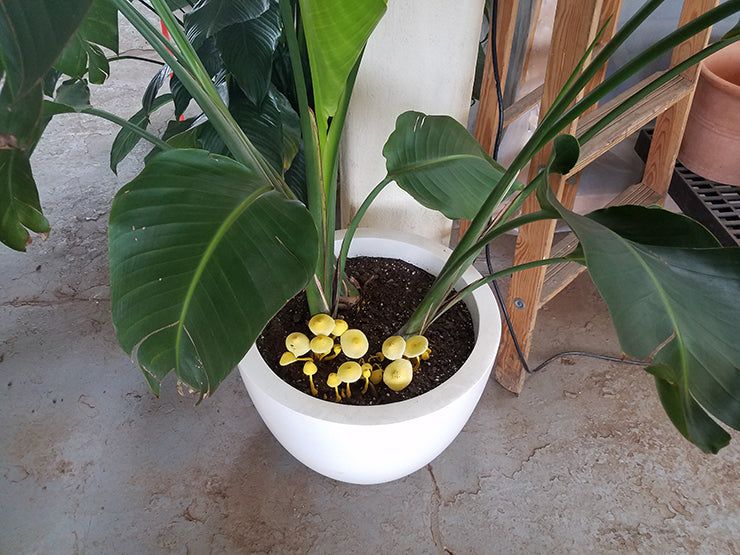 Occasionally, these fungi living in the soil or the plant will find themselves in ideal conditions and will reproduce by producing a mushroom. This is perfectly normal—and even considered a sign of good luck in some areas of the world!

We tend to think of houseplants as just the plant, but we often forget that each pot of soil is a tiny ecosystem. Microbes like bacteria and fungi live in the soil; some are helpful to our houseplants, while others are harmful. Most fungi in healthy soil exist to help the plant, and do so by many means.

To communicate with the plant, the fungus must connect with its roots. The fungus can send and receive chemical signals to and from the plant through these root connections. Some fungi will stay outside of the roots, while others may penetrate the root cells.

Regardless of which type of fungus the plant is interacting with, it accomplishes two major functions:

First – the fungus lowers the pH of the soil by selectively absorbing NH4+ (ammonium) and kicking out the H+. This helps solubilize and mobilize metals and phosphates that are essential for your plant. As a consequence of the ammonium absorption, this excess source of nitrogen also leaks into the plant. The plant trades carbon in the form of hexoses to the fungus for phosphates and other minerals. And it just so happens that phosphate is essential for plant life.

Second – not only do fungi provide nutrients to the plant, but they also allow chemical communication among plants. This network of fungi has been shown to allow insect-attacked plants communication to their neighbors. It has been measured that nearby plants will boost their own innate defenses if they hear over the mycelium that one of their neighbors is being attacked (sort of like a neighborhood watch program.) Some plants use the mycelial network for more devious purposes—spreading toxins and growth suppressants so that other plants cannot grow. While others use it for more altruistic purposes like sharing sugars and nutrients with neighboring plants. 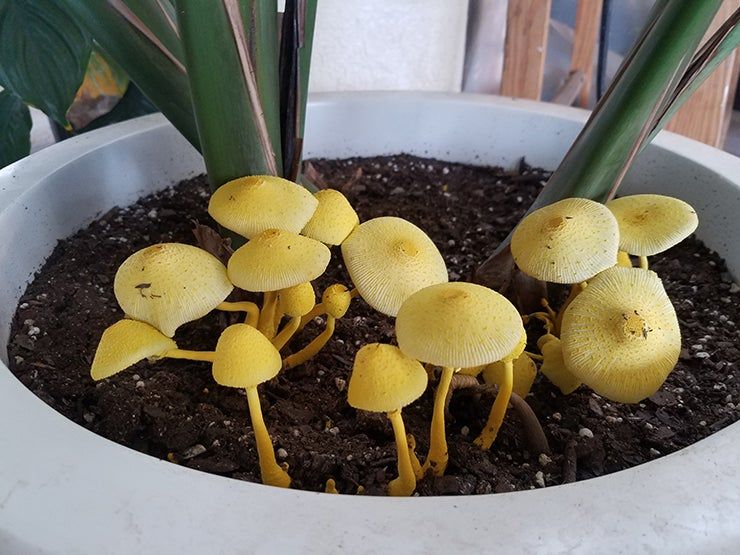 In conclusion, fungi, masters of the soil, can benefit your houseplants. When and if you see a mushroom in your plant's soil, consider it a sign of a happy, healthy mini-ecosystem.

If you don't love the shrooms, simply pull them out! This is only somewhat effective as there may be residual mycelium invisibly dispersed throughout the soil that may regenerate new mushrooms (but you can simply pull those out, too.) To avoid future mushroom growth, keep soil on the drier side, as fungus thrives in consistently moist conditions, and add a fungicide—we love Arber’s Bio Fungicide—to your plant care routine. 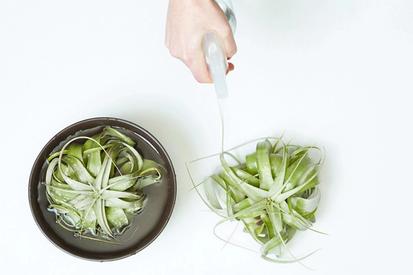 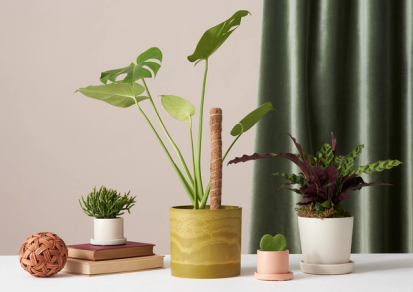 7 Tips for Caring for Houseplants in the Winter 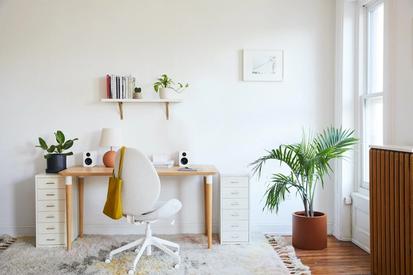 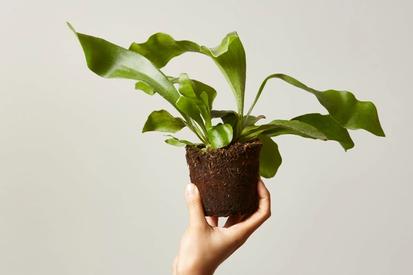 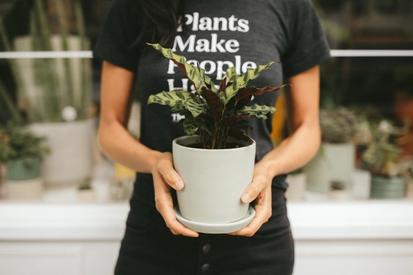 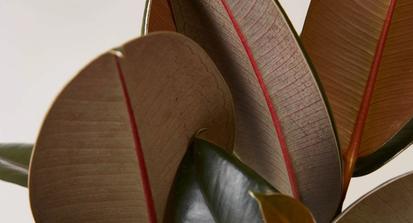